The links in the original version of this email that went out last night were incorrect. We apologize for any inconvenience. The links in the version below go to the right place. 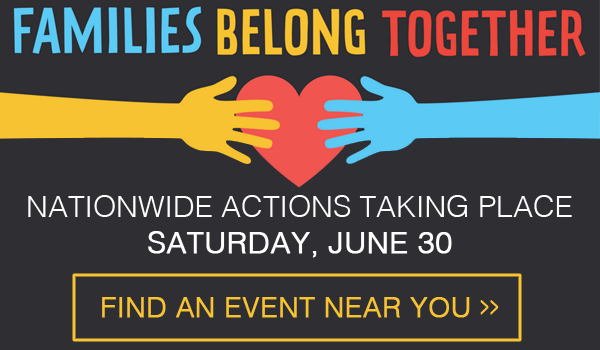 The Trump administration’s horrific family separation policy was just the latest in its brutal, dehumanizing assault on immigrants.

Trump ended Deferred Action for Childhood Arrivals (DACA), imperiling the futures of hundreds of thousands of Dreamers, and has been cracking down on immigrant communities with intimidation and harassment.

This Saturday, June 30, we’re standing with immigrants and speaking out against Trump and the Right Wing’s extreme anti-immigrant bigotry at hundreds of events all around the country.

Please find the event nearest you and sign up to attend!>>

Even though, as of this week, the government has halted separating families at the border, thousands of children have yet to be reunited with their parents. Many of the children who were detained are also sick and in need of medical attention that the administration is making it hard for them to receive — we’ve heard reports of volunteer pediatricians being denied access and many immigrant families fear taking their children to hospitals out of well-founded fears that they’ll be harassed by ICE agents there.

PFAW is joining allies like MoveOn, the ACLU, the National Domestic Worker’s Alliance, and many other groups as well as thousands of activists and concerned Americans to make this Saturday’s Families Belong Together events too big to ignore.

In DC and in cities and towns across the country, we’ll take to the streets to send the message that more Americans reject the Trump administration’s hateful attacks on immigrants than support them.

Will you be part of this historic day of action?

Find the closest June 30 event to you now>>

See you in the streets!

— Your allies at People For the American Way